Your life can change in an instant. In the Spring of 1999, I made a decision that would change the course of my life forever. As I watched news coverage of the refugees fleeing the war in Kosovo, an irrational fear gripped me. “This is going to be out of the news in two weeks and I will forget just like everyone else.”

That evening I sat down with my 11-year old son, Duncan, and told him about the Albanians being forced from their homes in Kosovo. They had witnessed their villages being burned down and had endured weeks of walking through the freezing mountain passes to refugee camps across the border in Albania. I then turned to him and asked what he thought we could do to support the survivors of this terrible war. He suggested we send toys to the refugee camps for the children who had lost their fathers in mass executions. That was a wonderful thought, but how? I was a single mom with two kids working as a commercial actress surviving on residuals that barely trickled in and didn’t see how it would be possible to afford such an expense. But then he turned to me and said, “Mom, I have $200 in my savings account, we could use that.”

So, my bighearted son and I went shopping. Soon after, I discovered that Albania was in a state of anarchy, and with the resulting chaos and corruption there was little chance the toys would end up in the refugee camps for which they were intended. There was only one way to guarantee their safe passage. They would have to be hand delivered. What I did next can only be described as a temporary loss of sanity or the beginning of a bizarre family vacation that has continued to this day. Over the next six weeks, I got our passports, went in for immunizations, and found someone to sublet my tiny Hollywood house for precisely one month so I could put my rent money toward two airline tickets. Toting a cheap Yashica student camera and a fake press pass, we launched into what would be the most important trip of our lives. It was June and NATO had started their bombing campaign against Belgrade. Thunderous fighter jets roared above us as we crossed the Adriatic Sea from Italy to the Albanian port town of Durres in a ferry swarming with the Italian Red Cross and a variety of relief groups. Surveying my surroundings, the reality of what we were doing suddenly hit me full force. I was going to a war-torn third world country with my son to deliver toys to refugees. Was I crazy? Somehow I knew this was one of the sanest decisions I had ever made.

We arrived at the camp hungry, hot and tired from sleeping on the hard benches in third class. The first several rows of tents were occupied by Kosovar prisoners of war. Three days earlier they had been released from a Yugoslav prison camp after having been tortured and starved for things like wearing a t-shirt with an American flag on it. The first refugee I spoke with was an 81-year-old man named Zymer Jusufi. Zymer’s two sons and eleven grandchildren were still missing.

He told me how they were given five minutes to get out of their homes. All of the families were gathered in the center of the street where they were beaten and ridiculed. One woman was forced to give birth in the crowd with no medical attention. Then they held up a 6-month-old baby and shot him in the head. “Now will you leave?” they laughed. Zymer spent 35 days in the mountains and another three weeks at the border waiting for his children. My heart felt like it was going to fall out of my chest. I tried to hide my tears.

The stories we heard in the refugee camps were devastating and not particularly appropriate for my son to witness. But what really shocked me was my own lack of awareness. In fact, I was outraged. I could no longer afford the luxury of ignorance as my mind became saturated with the ugly truth about genocide and other human rights abuses as they continue to exist in our world today. Standing in the middle of a refugee camp with my son by my side, I vowed to do whatever it took to become a voice for all victims of human rights violations. Thus began an extraordinary adventure as I began to travel with my children to conflict zones and the developing world using photography and storytelling to bring awareness to human rights abuses, especially human trafficking and modern day slavery.

In Haiti, we witnessed the cruel tradition of restaveks, a form of modern day child slavery. In Uganda and Sudan we met former child soldiers, previously enslaved by Joseph Kony’s army the Lord’s Resistance Army. In Bosnia, my son narrowly missed stepping on a land mine as we toured the hills where Serbian soldiers laid siege to Sarajevo, and in Nepal I was welcomed by a group of survivors who had been forced into the sex trade and were now working to change laws in order to protect other young girls from exploitation. My passion to bring awareness to human rights abuses and to inspire others to action became very clearly defined in these moments.

We, who are more fortunate, can make a difference. I believe If one person can negatively affect the lives of millions (think about dictators), so too can one individual change the world for the better. Many of the people I meet have tragic stories of unimaginable pain. Yet they still have hope. Their hearts are broken but their spirits are not. If they can dream of a future built on a shattered past, what can we do to nurture that hope? 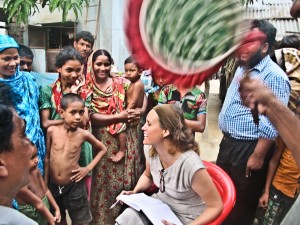 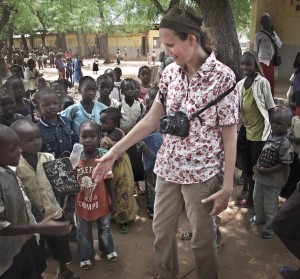 Lucy found her calling in the refugee camps of the Kosovo War in 1999. Since then, her photography has taken her to some pretty interesting places, including Haiti, Bosnia, Nepal,  Ugandaand Sudan, converting her into a passionate human rights activist. Now she is committed to exposing Human Rights abuses – in particular, modern day slavery and human trafficking. She is now leading a movement to challenge our definition of human trafficking as it affects our children here in the US. This movement will change the way we view sex slaves who are often times assumed to be prostitutes. In her current position as Communications and Media Outreach Director at Absolute Options LLC, a company she helped found in 2011, she supports people globally to mobilize effective campaigns for policy change around a broad range of humanitarian assistance, human rights and democratization issues, employing tools such as short documentary films, public speaking, and new social media. As a single mom of three wonderful children, she is also prone to spontaneous pillow fights and and never ever loses a tickle war. Find more from Lucy at her website or on Twitter @lucyobryan.